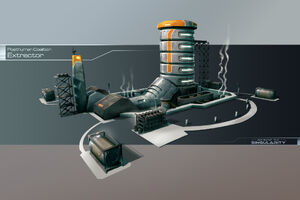 Radioactives constitute the basic streaming economy in Ashes of the Singularity, which must be mastered for good play. This means balancing the income and expenses so that you are not drastically over-spending with zero left in storage (crashing), or under-spending with maximum amount in storage (floating). This balancing act is generally more important than having the capacity to reinforce on demand since the starting storage limit for basic resources is only 500 (sufficient only to build several basic units without additional income), and upgrading that capacity costs valuable Quanta.

Below is a table for the income per deposit. For a a region with 4 metal deposits, the maximum for PHC will be 16 per second, and 14.8 per second for Substrate.

Knowing the above, a player that is floating on radioactives but crashing on metals can, for example, ease back on frigate production and invest more in teching and air units instead. The fastest way to spend metal, per factory, is to build combat cruisers. While Dreadnaughts cost ~3000

each to build, the per-second usages is smaller since they build very slowly.

The tension between gaining earlier upgrades and stronger units is one of the core mechanic of Ashes. Try to accumulate Quanta too fast and you become vulnerable to airstrikes and pushes; too slow and you start to lag behind in upgrades and abilities. There is also another mechanic of Quanta: each time you trigger an ability or upgrade, those abilities upgrades will become more expensive the next time you use it. This means that slowly adding more eco will be needed throughout the game if you wish to keep upgrading at the same speed.

Logistics is the limit to the size of your army plus defensive buildings. All players begin with 100

at the start of the game. The Units list contains a reference of amount of logistics each unit requires, which can vary between 1~3 for frigates, and up to 30 for Dreadnaughts. The Logistics cap can be upgraded using quanta, seen in the table below:

Victory points, if you have it turned on in a particular match. The deposits are generally located in the center and marked by a more elaborate icon. Fortifying this region and building forward factories to support it is advised if you are not going for complete domination, as well as a Quantum Jammer if you are rich enough.